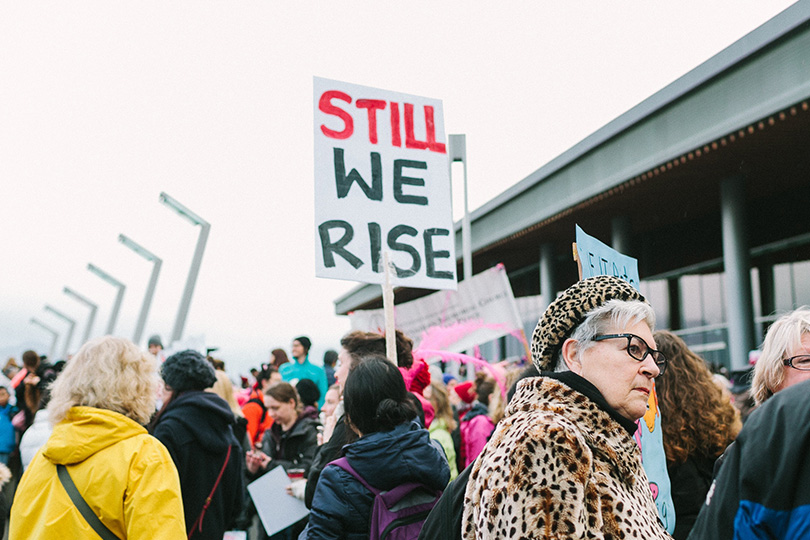 Not having heard much about The Women’s March, I was not inclined to participate. However, I joined the march last year on the 21st and it was remarkably thrilling to see the huge number of people who turned out to express their resistance to the new president. After all, how could one beat a march that stretched all the way from Judkins Park to Seattle Center without a break? When I began to hear that a march was actually being planned for this year, and expectations were that at least 50,000 participants were expected, I decided I had to be one of them. I talked my brother into meeting me at Westlake Center and joining the crowd there for the trek to Seattle Center. The march exceeded all my expectations. Despite the inclement weather, it was fun to wait for the marchers to arrive at Westlake and then to join them for the remainder of the journey. All sorts of signs expressed various opinions, some very clever and others less so, about the current administration and its failings. There was even a band providing music along the way.

I am glad I participated; it would have felt wrong had I not. This is not a time to be sitting idly by while the social fabric of our nation is being torn asunder. However one can best express him or herself, I believe it must be done. As a new resident of Bayview Manor, I believe I owe it to myself and my neighbors to speak up for what I know in my heart to be right. Many of my new neighbors here are or could be at risk of losing some of the protections they have long had due to threatened changes to our healthcare and welfare systems. And there are so many other fronts that are in danger, from women’s rights to the environment to immigrants. The list is endless.

If there is another march next year, I plan to participate again, to the best of my ability. Even if it is just showing up, it is a sign of support for the resistance against the policies and behaviors that are necessary to ensure we continue to live in a democratic nation.

Page Baldwin is an AgeUp board member, a retired University of Washington social worker, and a social change activist. Page’s AgeUp is… “Speaking truth to power.”